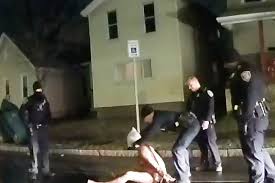 A naked Black man, restrained with handcuffs and his head covered with a “spit hood,” was forced into the asphalt by Rochester police before going limp and dying days later, his family said Wednesday.

Relatives of Daniel Prude, 41, released police video and claimed that it shows officers used excessive force to control him. Prude had told police he suffered from COVID-19, prompting officers to put a hood on his head, apparently to prevent him from spitting on them. He was visiting from Chicago and suffered from mental illness, his brother, Joe Prude, told reporters. The incident on March 23 — more than two months before George Floyd died during similar police action in Minneapolis — came to light Wednesday after part of the body camera video, obtained from police on behalf of family members, was released by their lawyer to NBC affiliate WHEC of Rochester. “He’s defenseless,” Joe Prude said. “He’s got on no damn clothes. … They’re treating my brother like a damn animal. You sit there teasing him, laughing and making practical jokes. “The circumstances of Daniel Prude’s death sparked protests in the western New York city on Wednesday night and community activists vowed to keep pressing for action against the officers involved.

“We have serious issues which need to be addressed,” the Rev. Lewis W. Stewart, president of the United Christian Leadership Ministry of Western New York, told supporters on Thursday. “But our first issue is dealing with RPD and getting those cops fired and prosecuted.” Rochester Mayor Lovely Warren and Police Chief LA ‘Ron Singletary expressed empathy for the Prude family but said there wasn’t much they could do because New York Gov. Andrew Cuomo issued an order July 15 giving the state attorney general jurisdiction over the investigation. “It’s not within our control,” Warren said at a separate news conference Wednesday. Singletary said he has to wait for the state to complete its investigation before he can determine if any officers involved should be disciplined. “The officers have not been suspended as of yet,” he said. A spokesman for the Rochester Police Department declined further comment on the matter Thursday. A representative of the local police union, the Rochester Police Locust Club, did not immediately respond to telephone and email requests for comment Wednesday and Thursday.