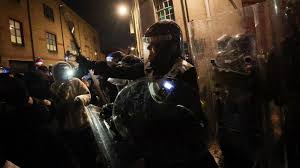 Protesters planning two further Kill the Bill demonstrations have been urged to “engage” with the police in advance.

Avon and Somerset Police said changes to Covid guidelines implied tranquil fights could happen under specific conditions. Supt Mark Runacres said the power could help coordinators “guarantee any fights are lawfully agreeable”. Police have likewise delivered a further 13 photographs of individuals regarding the Bride well fight on Sunday 21 March. In absolute 25 individuals have been captured regarding that fight. Arranged fights are because of happen in Bristol on Tuesday and Saturday. “Following changes to Covid guidelines, there is currently an exclusion to permit tranquil fights. “We would urge any dissent coordinators to draw in with the police so we can assist them with guaranteeing fights are lawfully agreeable, while likewise limiting the danger of the overall population during this well being crisis. “We do comprehend the strength of resistance to the new enactment being bantered in Parliament yet we’re requesting that individuals practice their entitlement to dissent capably because of the unmistakable well being concerns,” said Mr Runacres He rather encouraged individuals to discover “elective approaches to communicate”, like composition to their MP or marking an appeal. “Policing plans will be set up to deal with the two fights should they go on and extraordinarily prepared dissent contact officials will join in and hope to work with those accumulated,” he said. “We regard individuals have a central option to dissent and should the fights happen, we need to guarantee they do so calmly and without episode.” There have been three showings against the Government’s new Police, Crime, Sentencing and Courts Bill in Bristol in the previous eight days – with viciousness emitting on each occasion Bristol West Labor MP Thangam Debbonaire said: “There is no reason for this brutality, which has left individuals harmed and public property annihilated. “I support police endeavors to deal with those dependable,” she said. She added that she was addressing constituents who were advising her policing was “too forceful or intense in the new showings”, charges which she is circling back to Ch Con Andy Marsh and other senior officials at Avon and Somerset Police. The MP said the savagery was a “interruption” from the “genuine worries” about the Bill and she has urged coordinators to work with police “to guarantee tranquil fights go on”.