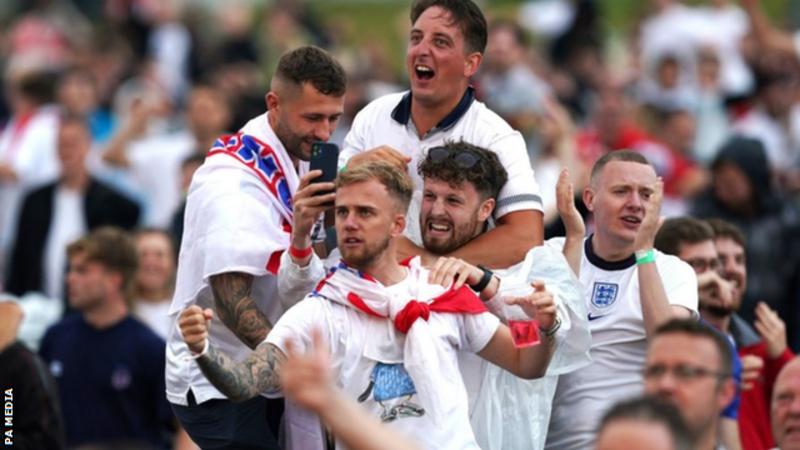 England’s footballers face Denmark at Wembley in the semi-finals of Euro 2020 on Wednesday, knowing victory will earn them a place in a major final for the first time since 1966.

Gareth Southgate’s side thrashed Ukraine 4-0 in front of a small number of England fans in Rome.Covid travel restrictions meant fans in the UK were told not to travel to the game in Italy’s capital – but all four goals were celebrated loudly by Europe-based England fans inside Stadio Olimpico.There were extra police patrols outside the ground to deter fans from the UK from getting in.Instead, expats from mainland Europe managed to get tickets so England’s players felt at home.”These nights bring together families, communities,” said England boss Gareth Southgate.”To give people hope and looking forward is a part of the privilege of the job.”Wembley has hosted five Euro 2020 matches so far, with England’s 2-0 win over Germany in the last 16 watched by a crowd of 41,973.Spain and Italy meet in the other last-four game and England’s national stadium will host both semi-finals as well as the final on 11 July, with 60,000 fans to be admitted to each of the three games – 75% of the stadium’s capacity.Italy play Spain on Tuesday, with England’s match against Denmark 24 hours later. Both games will kick-off at 20:00 BST.Remaining tickets went on sale earlier in the week.Ticket-holders aged 11 or over need to prove they are fully vaccinated via the NHS app, with both doses received at least 14 days beforehand. Those not fully vaccinated must show proof of a negative lateral flow test from the previous 48 hours.The games are part of the government’s Events Research Programme, which is tracking Covid transmission at large events.UK Culture Secretary Oliver Dowden said the upcoming games were “an unforgettable moment in our national recovery from the pandemic”.Two goals from captain Harry Kane, one from defender Harry Maguire and another by substitute Jordan Henderson earned England their biggest win in the European Championship, overtaking their 4-1 victory against the Netherlands in the group stage of Euro ’96.It leaves them one win away from a first major tournament final since winning the 1966 World Cup at Wembley.And Southgate, whose side beat Germany in a knockout tie for the first time since that World Cup final 55 years ago, said his team wanted to “go two steps further” and win the tournament.”It’s lovely to see everyone on a Saturday night, beer in hand. They should enjoy it,” he added.”It’s been a long year for everyone. I’m chuffed the two performances have brought so much happiness to people.”It’s fabulous for our country – a semi-final at Wembley. Everyone can really look forward to that – it’s brilliant.”England’s semi-final opponents Denmark have had an emotional but impressive Euro 2020.The Danes have gone from strength to strength in the tournament since the trauma of their opening game, during which midfielder Christian Eriksen suffered a cardiac arrest.Having hammered Wales in the last 16, they impressively dealt with a dangerous and physical Czech Republic side in a competitive last-eight tie played in a red-hot temperature in Azerbaijan on Saturday.It is nearly three decades since Denmark shocked the continent with their victory at Euro 1992, taking advantage of a late call-up to the finals to produce their country’s greatest sporting moment.They are currently in the process of writing yet another fairytale in the competition.Denmark are ranked 10th in the world – six places below England, who are the highest-ranked side left in Euro 2020 following the exits of Belgium and France.There were also jubilant scenes elsewhere as fans kitted out in England football strips and costumes gathered in designated fan zones, pubs and bars to see the historic win.Ann called BBC Radio 5 Live’s 606 and said it felt like there were 11,000 England fans inside the ground.”I am just so proud of what I saw tonight,” she added. “I’m just grinning from ear to ear. I don’t know if I’ll be able to sleep tonight. All the ingredients are there, I trust the manager and the team on the day, and I think we can go all the way.”Another caller, Max, said he was pinching himself at an “absolutely fantastic” result.”Will England do it? At home, with the backing of the fans, it will definitely be a tougher test but I’m confident we’ll get past Denmark,” he added.