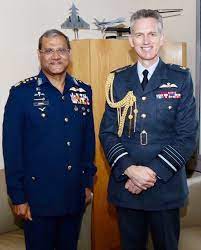 The head of the Royal Air Force has written to all his personnel promising to address as a “priority” concerns around recruitment policies and staff conduct from within the service.

In media accounts, disputes about diversity targets and claims of bullying, intoxication, and sexual harassment in the Red Arrows have been emphasised.There are “valid questions,” according to Chief of the Air Staff Sir Mike Wigston.He stated that the topics would be discussed at an RAF board meeting on September 7th.The Royal Air Force has experienced a summer of negative press, with articles emphasising its ongoing difficulties in training pilots, worries about diversity goals, and allegations involving the Red Arrows aerobatic squad.The team’s top pilot was suspended, another quit in protest of a “toxic culture,” and one left for unknown reasons, according to a report in The Sun published last week.An investigation of the Red Arrows was already ordered by the Chief of the Air Staff; it began in December of last year and is currently ongoing. According to an article in The Times, accusations from young female recruits included claims of misogyny.His letter has now sparked concerns about leadership and seems to indicate that the criticism and potential reputational harm are reaching the top.You will be aware of the continued attention placed on the Royal Air Force in the media and on social media over the past few weeks, he said to the RAF troops.”I am fully aware that the coverage affects us all—whether regular, reserve, civil servant, or contractor—as well as our families and loved ones, and there are genuine questions being posed that I am determined we will address as a priority,” the official statement read.Sir Mike said that the RAF was correct to respond to issues with “rapid action,” but he urged staff to discuss future complaints directly with their chain of command rather than the media.Unacceptable behaviours have no place in our service, he declared.Despite the recent resignation of a top female recruiting officer, he maintained his goals to boost the percentage of women, black, and Asian recruits who join.