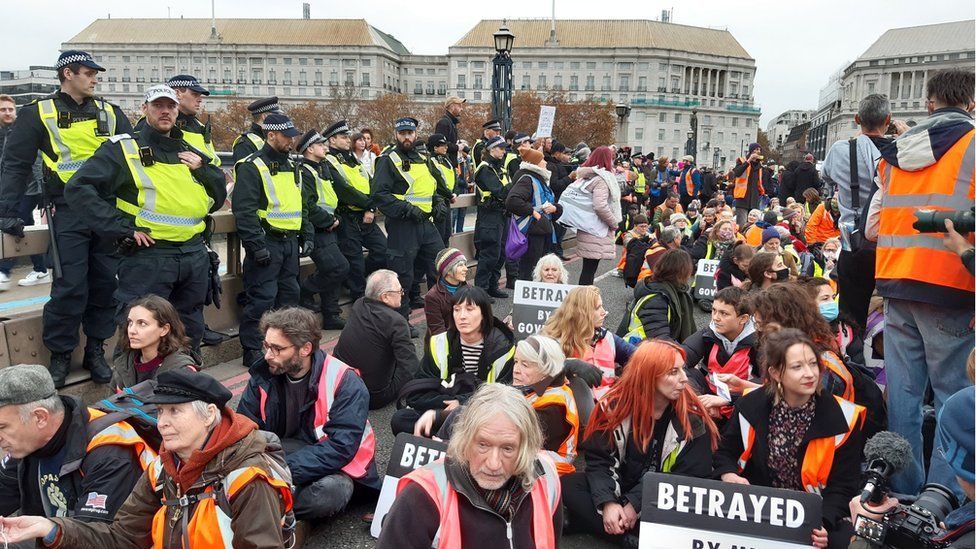 Police have arrested 30 climate activists after a central London bridge was closed by a sit-down protest.

The Lambeth Bridge showing was held on the side of nine Insulate Britain campaigners who were imprisoned for the current week for challenging an order on street barricades. Up to 250 individuals participated in the demonstration, closing the extension for a really long time. Police made the captures in the wake of forcing Public Order Act conditions on the dissent. The Metropolitan Police said the scaffold was resumed at around 19:00 BST, with the last nonconformists eliminated from Vauxhall Cross a couple of moments later. Prior, formally dressed officials remained on Lambeth Bridge while traffic was redirected, with police saying it was “for the security of all”. Campaigners let the group know that the nine imprisoned Insulate Britain campaigners were “political detainees” who won’t be the last to be secured for their feelings about environmental change, The nine nonconformists were given sentences of three to four months for breaking a directive, pointed toward forestalling the barricades which have carried a few streets to a halt and started outrage among drivers. Activists on the extension said they would not be discouraged by the danger of jail. Gabriella Ditton, 27, an artist from Norwich, told the PA news office she has as of now been captured multiple times with Insulate Britain. “I hope to go to jail eventually for somewhere around a half year since I won’t be remorseful with regards to this,” she said. She said “common opposition” was important to make the political will to tackle the environment emergency. Zoe Cohen, 51, who went from Warrington, Cheshire, to dissent, said “conventional individuals ought not need to do this and hazard jail”. She said the interruption brought about by the fights was “minuscule” contrasted with the demise and experiencing brought about by environmental change. Gorge Bujak, a campaigner connected with Extinction Rebellion, said to police at the dissent: “These roads are our own and we will place one foot before the other, and challenge you to stop us.” She added: “You can imprison the resister yet not the obstruction.” One more told the group, to cheers, that “great individuals have an obligation to defy terrible laws”. Protect Britain said it was not engaged with getting sorted out the showing, which members said was “local area drove”. Yet, the gathering has said it means to keep on fighting until the public authority consents to guarantee homes are protected by 2030 – a critical component in decreasing the UK’s energy use and fossil fuel byproducts. The High Court has given five orders so far to forestall street barricades, covering the M25, just as other significant streets around London and the port of Dover. However, Saturday’s captures were made under police powers to force conditions on open congregations or parades, limiting the numbers joining in, area or length.