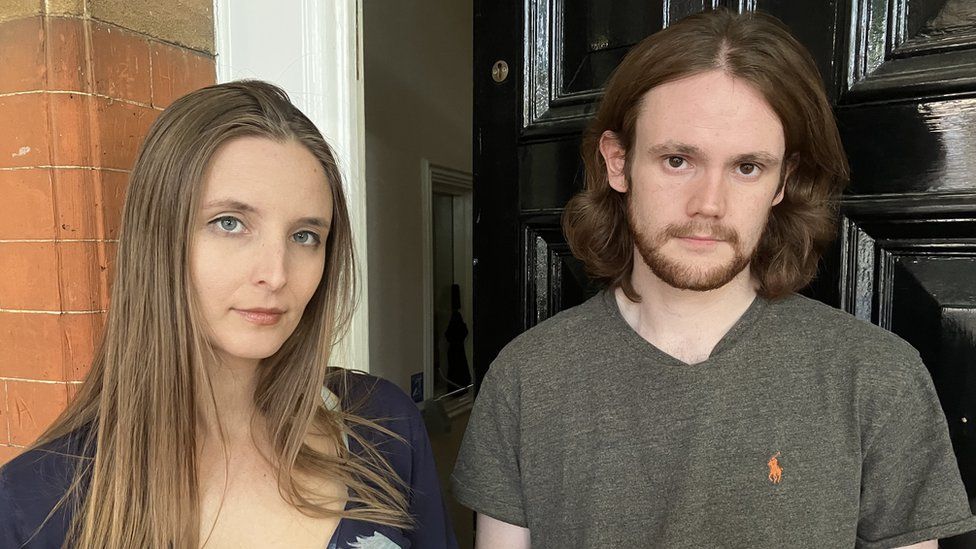 Four in 10 of this age group are now spending more than 30% of their pay on rent, according to the data – a five-year high.Experts say spending this level of income on rental costs is unaffordable.While London has the highest rents, affordability has worsened in towns such as Rotherham and Bolton for young people since the pandemic.The data suggests under-30s spend more of their earnings on rent than other working-age groups. The figures cover 150,000 young people and were supplied by property market consultancy Dataloft.Megan Stephens and Richard Stranks, from London, had their rent put up from half their wages to two-thirds of them.”We were not expecting such a big increase… that was the real punch in the gut,” said Mr Stranks.It comes as younger people’s finances are being squeezed, amid rapidly rising living and rental costs, and a fall in real incomes.Under-30s are less likely to have dependents and are sometimes more willing to move around, so could feel able to pay higher rents, experts told the BBC.But Nick Gallent, a professor of housing and planning at University College London, warned that young people being locked into expensive renting now could cause future problems.Young renters faced a difficult winter, he said, amid rising inflation and energy bills, describing the situation as “horrendous”.”Despite all the economic problems, house prices and rents continue to nudge upwards,” he said.London couple Ms Stephens and Mr Stranks decided to move out of their house-share last June, as they felt like they had no alternative.”My income did grow a little bit, but not by as much as the landlord increased the price,” said Ms Stephens.The couple have now found cheaper accommodation as property guardians of a former local authority office block in Newham, east London.They may have to move out with a month’s notice, but they said the move was an easy decision.”It means that I can save, and that’s a big thing for me” says Ms Stephens.Housing campaigners Generation Rent warned the situation for younger renters was “dire” and called for the government to freeze rents and pause evictions.The Department for Levelling up, Housing and Communities said it recognised people were facing cost-of-living pressures and that paying rent was likely to be a tenant’s biggest monthly expense.”That is why we have taken action through our £37bn support package to help households with rising costs,” it said.The government also said that its plans announced in June would provide renters with a “fairer deal”.The proposals would ban landlords from evicting tenants in England without giving them a reason, and give renters more power to challenge unjustified rent increases and poor conditions.More about the dataThe analysis of renters under 30 years old for the year to the end of June 2022 is based on records from 150,000 tenants collected by major tenant referencing companies and aggregated by Dataloft.It excludes income outliers, including those earning less than £10,000 because they are likely to be supported by other sources of income or by guarantors.Across all the age groups, Dataloft has data for over 400,000 records for the year to the end of June and estimates it covers 40% of the rental market in England, Scotland and Wales.Many housing organisations regard spending more than 30% of gross income to be unaffordable and the Office for National Statistics has also used the benchmark in its affordability analysis.